Congratulations to my friend and student Alan Austin on winning the Teise Trophy!

If you look after your game, body and mind as Alan has, you can always compete with players much younger than yourself !

Check out Alan by clickng image or below: 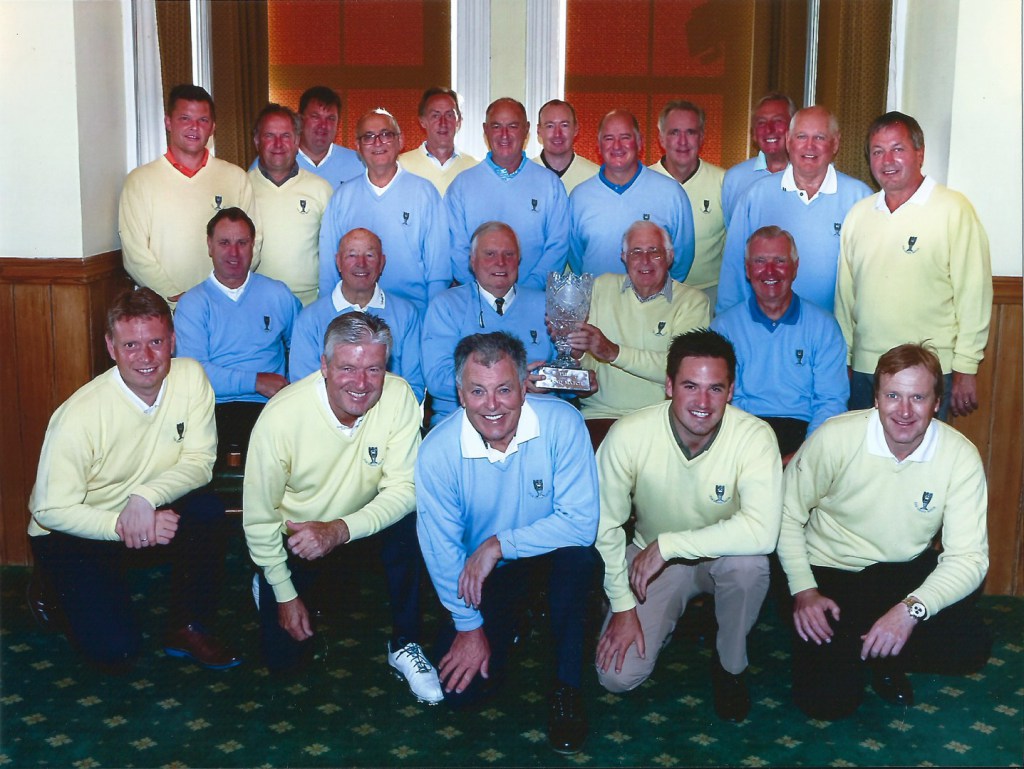 Great to play in the Grand Match at R.C.P again. Question : Standing behind Peter Alliss is Gordon J Brand, but which former Ryder Cup player is standing directly to his left ?

First correct response to me via email will receive a FREE lesson.

CLOSE BUT NO CIGAR !!

Finished 1 shot off the lead in the recent K.P.G.A Championship at Sene Valley. Everyone has a story but I should have won for sure ! But as Faldo once said, golf is 90% disappointment.

What a preformance by a quality team.

Wonder how many of the team will win majors, tour wins and play in Ryder Cups ?

What do you think ? 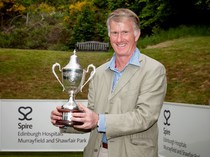 What are your thoughts students ? 29th Sept

Nice to win,or tied 1st at least ! Kings Hill's own Pro am. Old saying I guess " If youre gonna talk the talk you gotta walk the walk". Click here for results.

Great form of late from George Mullins. Winner of the SE Group Junior Championship at Moor Park with scores of level and -4, and also tied 7th in the Carris Trophy. Keep rolling and holing on the greens for The British Boys Championship next week !!

65  at Wrotham Heath pro-am! 2nd place. Of course teaching and improving my students golf is my main job, but it was great to put the clubs on my back and shoot a decent score! thanks to my team comprising of Nick & Tom Farrell and Liam Brown for an enjoyable day .

Great result for Freddie Price in winning the Open Championship Regional Qualifier at the London GC. Play twice like that again mate and you will make the main draw !! Click here for results.

Fantastic to play Royal Blackheath Golf Club Pro-am yesterday. One of the oldest clubs in the world. Tied 3rd individual and the team 2nd.Click here for results.

Biomechanics day with Mark Bull today. A MUST for any serious golfer ! Please contact me for more information. 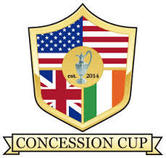 Well done to Richard Partridge on winning his singles match in the Inuagral Concession Cup. Click here for more information 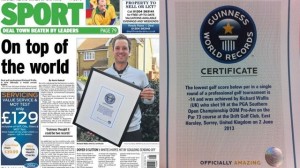 Well done Richard. A world record. I think we will call this being in the "zone!". Click here for full article

What an honour for me to be the coach of the world record holder ! 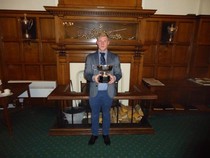 Well played Henry on winning the 2013/14 Kent winter trails(Hinge Trophy). Anything is possible for you this year mate ! Click here for the report.

In the late 90's I was assistant professional at The Wildernesse Golf Club, a beautiful golf course near Sevenoaks, Kent. It was great to play in their Pro-am this year and I forgotten how wonderful a place it is. Just one shot less and I would have tied 1st !!!

"If your gonna talk the talk you gotta walk the walk"

These days my focus is more on coaching, but it was nice to play quite well at The Wrotham Heath Pro-am and finish tied 2nd

Congratulations to Richard Partridge on being selected for the European Champioships and the Senior Mens Home Internationals. Nothing less than you deserve. 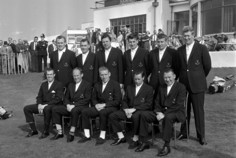 Although it is three years since the passing of George, his presence was very much in evidence on 5th August when the club staged the second Memorial Pro-Am in his honour.

Tales abounded of his many exploits as members of the 28 participating teams recalled their own stories of time spent in his company during the 26 years he was either, our club professional, or coaching them from his Kent bases on his return from Belgium in 1993.

I played pretty well and had 2 eagles !Click here for results

Congratulations to Michael Saunders on being selected for England in the upcoming home Internationals at Ganton GC (Aug 14th-16th). A full England cap is hard to earn ! 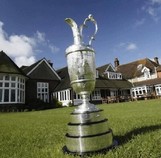 Sensational golf lately by Richard. A seven shot victory in the latest Europro event, an unbelievable -14(59) in the Southern Region PGA Pro-am at the Drift and a further 2nd place finish in the event losing in a playoff. I make that -41 for his last 7 rounds! Watch this space !

6th in the Welsh Open Strokeplay

5th in the Lagonda Trophy

Well played Bobby Twyner and Charlie Haggar in qualifying for The Brabazon Trophy.

Bobby led the 131 strong  field with a gross 69 in testing conditions and Charlie in 14th place with a solid 73. The game owes us nothing but it is satisfying when the graft pays off. CLICK FOR SCORES. 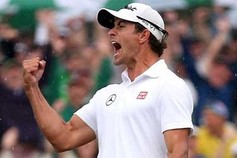 Wow, what a US Masters

After last year's drama in the British Open and the manner of how he handled losing a 4 shot lead I am sure we are all delighted for Adam Scott. These great players are so mentally tough as well as having great games ! 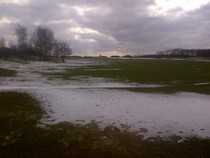 Great performance from Michael Saunders and George Mullins in reaching the semi-finals of the prestigious Sunningdale Foursomes. A nice kick start for the season ! 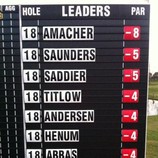 Congratulations to my long term client and friend Alan Austin on winning the best net in the Hinge Trophy this winter ( and 7th place gross ). Top man Alan, you showed those youngsters' mate ! 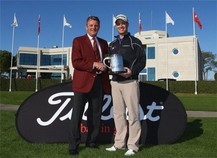 I had the privilege this year again to play in the above which is a 10 man per side match between former Ryder Cup players v former Walker Cup players. It is a great event sponsored by Deloitte and hosted by Peter Alliss. The final result was a tie, 5 points to both sides.

Did you know that 4 of Kent's leading amateur golfer won 4 national EGU ranking events this year?

In addition to this Max Orrin from North Foreland is ranked England's best junior golfer !!

It was great to be apart of the above day which raised in excess of £8,000 for Cancer and Amyloidosis Research. George was an amazing person to know and be around, as well as a friend and mentor to me. Many well know faces and names played on the day which showed George's popularity amongst the golfing world. Please read the links and results to find out more about the day and how you could be involved next year !      (10th Aug) 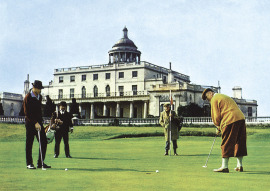 Thanks to MICROS for hosting a great day at Stoke Park Golf Club. I still couldnt find Blofeld's ball in the rough at the 17th ( A famous scene from the James Bond film Goldfinger )

Biomechanics day with Mark Bull today. A MUST for any serious golfer ! Please contact me for more information.

Please contact me for more details on the below:

On December 5th we had one of Titleist senior club fitters with the aid of "Flightscope" here.   The new 913 Driver for members

and visitors. Well received by all concerned!

I always love to hear about my students progress. Please let me know so I can post it on my website in this space !!!!

Darren Timms from Mid Kent Golf Club carded the best round of the day, 65, to put him in a playoff with round 1 and round 2 leader Julian Taylor from York Golf Club. This was the first playoff in the competitions history and only lasted one hole, the par 5 10th. 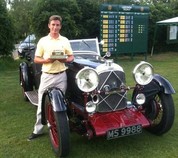 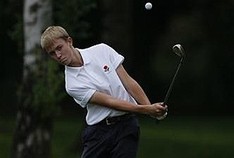 Price picks up Faldo Series title at Royal Ashdown Forest25 April 2012: England’s Freddie Price celebrated victory in the second Faldo Series UK Championship of the 2012 season with a level-par 72 at Royal Ashdown Forest in Sussex.  The 18-year-old from Royal Blackheath beat Steven Gibbs (Sedlescombe) on count back after the event was reduced to 18 holes due to flooding.“I missed out by one shot a couple of years ago which makes winning now feel extra special,” said a delighted Price who qualifies for the 16th Faldo Series Europe Grand Final, to be hosted by six-time Major Champion Sir Nick Faldo at Lough Erne Resort in Northern Ireland in September.﻿﻿ 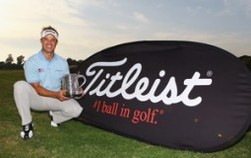 After back to back Order of Merit titles, Wallis believes he is playing the best golf of his career and credits that to a change in coach plus the installation of a putting green in his back garden
"I changed my coach (Paul Page, Kings Hill) a couple of years ago and my shape from a cut to a draw which has made a big difference because I've had two years of winning the region order of merit which is a massive boost," he added. 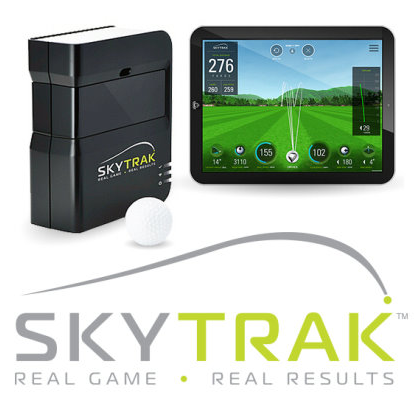